It is lightning quick, clean, green – and expensive. But shouldn’t we think again about magnetic levitation?

Clean, green, quick and quiet; no wheels, no engines to fail; able to stop quickly and safely and glide off noiselessly on a cushion of air.

Magnetic levitation (maglev), according to 1980s science shows like Tomorrow’s World, was to make domestic air travel defunct, humming from city to city at 500mph with negligible effects on the environment (and no need to remove your belt and shoes).

With no wheels and only one track, Maglev trains would pooh-pooh bad weather, the wrong type of leaves on the line, or a points failure at Cricklewood. Because of the way maglev (in various ways) repels the train above its track, derailments are unlikely: the further the vehicle gets from its track, the stronger the magnetic force pushing it back. No signalling nor moving parts to go wrong, one track, with all the trains travelling at the same rate. Imagine the effect on commuting and by extension the economy – the midlands would be half an hour from London.

Amid the traffic jams and pollution, a greener mass transit solution now makes sense more than ever. 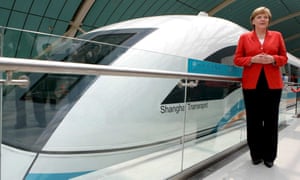 So why were you manifestly unable to glide supersonically to work this morning? The concept has been in R&D for over a century, with dozens of patents filed since the early 1900s, but there have been only a handful of commercially viable systems built, of which three – all in Asia – survive today – though more are now being tested around the world.

Britain was actually ran the world’s first: the Birmingham airport AirLink shuttle that ran from 1984-95. This proved popular, and cheap to run, butunreliable and expensive to maintain – as a one-off, components were hard to find.

Germany also blazed a trail with West Berlin’s M-Bahn in the late 1980s – a driverless train on a mile of track with just three stations. Then, with unification, floating trains were put on the backburner and the line was closed. The manufacturer, TransRapid, maintained a test facility for the trains until an accident killed 23 in 2006, and that would have sealed it for German maglev had TransRapid not been commissioned to build the Shanghai airport maglev in 2002. This remains the world’s fastest electric train (237mph), and makes the 19-mile jouney from the airport to Shanghai’s business district in eight minutes, (it’s an hour in a taxi). China now also has a medium-to-low speed (about 160 kmh) maglev line in operation in Changsha, the capital of Hunan province. China likes maglev so much it says it plans to launch services in up to 12 cities by 2020.

There are now several other maglev projects in progress in Asia; the best known perhaps being South Korea’s Incheon airport maglev, the unmanned EcoBee shuttle. This shortish line was completed in 2012 and the shuttle travels at around 110kmh, linking seven stations. (And it’s free: Heathrow Express take note.)

Japan’s Linimo line near Nagoya runs a similar urban light rail-style vehicle at relatively low speeds. The Japanese are old hands at maglev, having laboured patiently (and expensively) with the technology since 1969. Their much more ambitious Chuo Shinkansen (bullet train) maglev line is already under construction and will see trains eat up the 178 miles between Tokyo and Nagoya at 310mph – mostly underground.

So it can be done. Why can’t we do it? Why are we ripping up the Cotswolds to allow HS2 to blast noisily through our dwindling countryside when the Japanese can silently tube through 178 miles in under 40 minutes?

Money. If you’re going to build maglev you must do so from scratch. Most governments simply won’t take that hit, especially if standard rail infrastructure is already in place. Shanghai’s maglev cost US$1.2 billion to build; Japan’s will be around US$82 billion. The US Federal Railroad Administration has baulked at the US$100 million per mile it estimates it would cost to build it over the pond. 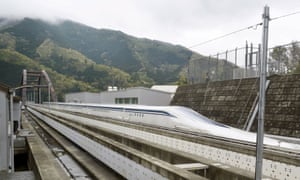 Plus, there’s no guarantee of profit, and if that’s your motivation, the political will is unlikely to be forthcoming. Even the successful Asian projects were brought to fruition decades late and at great cost. Japan was at it for four decades. The Shanghai line has been losing money – some 600-700 million yuan a year, in addition to its massively expensive build cost, since it floated in 2004. (Partly because it doesn’t go anywhere. The line, essentially a prototype, dumps flight-weary travellers in an outer suburb, where they must get another train somewhere genuinely useful). The Chinese government may be able to engage in such chest-thumping, but most governments will feel it’s cheaper to upgrade the existing railway, unless the cash comes from private sources. But even the much vaunted, ostensibly private Japan railways group was for most of its history state-run, and even today is heavily subsidised.

As for Blighty, it has been suggested that the UK’s current power profile may mean maglev is uneconomical for long distances – hence no maglev HS2. Yet a state-run, clean, green cheap rapid transit system surely should be an investment for the future, with bif potential savings down the line in lower future maintenance and better reliability. Incheon’s maglev may have cost US$35m per km, but they boast that’s a third of the cost of regular rail, and “while the cost of supplying electricity to a maglev line is 30% greater than for a regular light rail, it costs 60% to 70% less to operate the train.”

Likewise, the Japanese Linimo line may have cost around $100 million/km to build, but is proving to be low-maintenance, reliable and quiet compared with traditional transit systems (and ideal for cities, with zero emissions). Even with our own HS2, it was estimated as far back as in 2006 that the cost of the maglev track would only be half that of the Channel rail tunnel.

We should watch Asia with interest. If nothing else, they are showing that if there’s a political will, there’s a railway.