I think that fourth night must have been the first one I’ve spent at 2,700m and I didn’t seem any the worse for it. I tugged at the wooden shutters to see what day five on the road might have in store. Weather: acceptable for driving on dodgy roads. High, thin clouds cut with watery pastels. A shabby old town in diluted blue and sunbleached turquoise. The plaza mayor was just creaking into life. A cluster of women in straw hats held conference outside a grocer’s. A policeman heaved open the giant wooden double doors of an eroded old police station, yawned, and spat.

I took a cold shower, dressed and started lugging trunks and sample boxes from last night’s sorting. Prof. Knapp was already up (of course) dismantling the drier. The daily task of packing seemed a little more arduous this morning. Either the altitude, or the shin-barkingly steep antique stairs. The van was parked in a square pound at the back of the hotel, that looked appealingly like the OK Corral. Sandy had been a little concerned that the truck might not still be there this morning, but the locals seemed harmless enough to me, if not exactly chummy.

The growing light revealed our hotel to be of a certain vintage; much of the rear was semi-derelict and empty. I creaked back and forth with my boxes through creepy cavernous dusty backrooms, using the return trips to investigate dark passages and musty staircases leading nowhere, the only sounds my wheezing and the drip of an old tap. And here an appealingly dilapidated old dining room-dance hall I could imagine thronging with local revellers.

After breakfast I took a few moments to explore the town, too. It might be old hat for the Dr Livingstones in our midst but I was unlikely to set eyes on the place again. Erica likes telling me how amusing it is reading my rhapsodic perspective on what she sees as routine grubby fieldwork: I see cascades of mountains; she sees dirty socks drying on the dashboard.

The market was already open for a day’s easygoing trade. I ambled over. Three schoolboys kicked a burst ball to each other on the way to classes. The policeman hadn’t moved. Stallholders unhurriedly erected awnings and set out their wares along the narrow thoroughfares, the alley-tunnels filled with the pungent aroma of meat, overripe fruit and hawker-stall breakfasts. I bought plump oranges and tomatoes for lunch from one of the impassively leather-faced vendors and wandered back to the hotel, ready for another day behind the wheel.

But no! Erica announced she’d be driving today, to ‘give me a break’. The cheek. I protested firmly, in my quietest voice. This felt like cheating, but I was anticipating incredible scenery, ahead so I didn’t flap.

In contrast to other towns thus far it was a fair doddle finding the route out of town. Without at least two simultaneous sets of directions being offered in each ear, the going seemed somehow easier. Being fair, it wasn’t hard to navigate. There was little traffic, and thanks to the colonial grid system we simply had to find the edge of the town and keep going until we hit a road going east.

But here a sign, which told us it was a mere 150km to our next stop, Leymebamba, and presently we started climbing.

The narrow road wound up again through foothills scarred with gold-mining quarries, many illegal. The locals had been protesting for some time, largely to deaf ears, that these mines – many sponsored by American multinationals – are polluting the water supply.

Above the scarred hillsides we rose… the road surface was perfect and I couldn’t help thinking what an epic bike ride this would make for the stout of heart. Eventually the treeline gave way to rousing views of Celendin far below, where the light-blue double steeple of the church in the town square poked above the ramshackle rooftops. The town nestled in a half-bowl surrounded by hills. It must have looked attractive to the early Inca settlers and, unfortunately for them, the Spanish too. The head of the valley ended in an unseen drop, and far beyond were mountains whose peaks seemed oddly level with the town itself… now it was clear how high up the town was.

Still we climbed, this time without finding any locals to pester about their potatoes. Spying as yet no specimens, we meandered upward and upward, through rugged moorland, ever closer to the clouds that before had seemed so far off. As the sun finally renewed hostilities and the clouds began to leak a bit of sunshine, we reached a high pass of about 3,500m where a tiny village sat incongruously amid the rugged landscape, complete with a tiny football pitch and neatly planted conifers. The place had a strangely manicured feel.

Then, suddenly, the other side. As we breached the other side of the pass, a completely different panorama opened up. A dramatic series of valleys and mountain ranges rolled into the east, rib upon rib wreathed in mist, multiple horizons fading toward the Amazon. Somewhere to our right, far below and well beyond view, the Marañon river was thundering on its 1700km looping journey toward the king of rivers. My head span at the spectacle. Sandy and Evelyn discussed tomatoes. Erica drove on without comment. 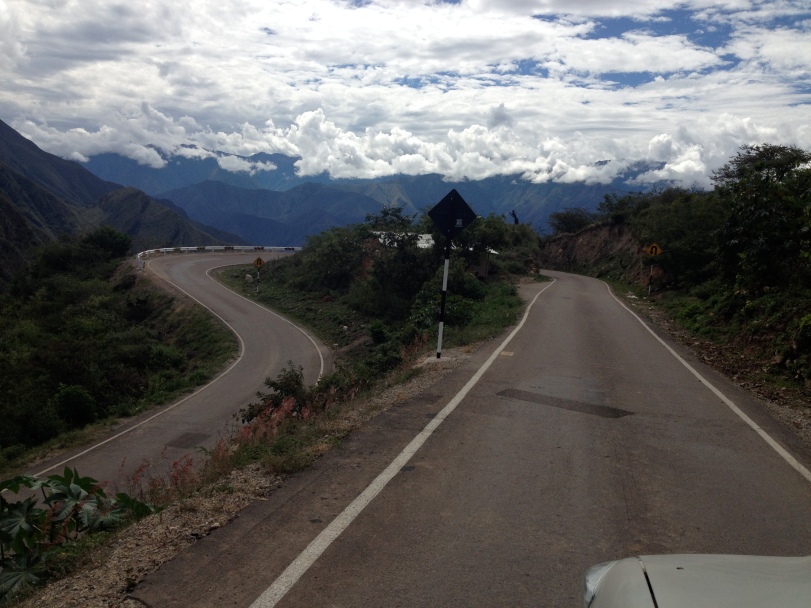 Our way wasn’t getting any wider. As we wound downwards, hugging the cliffsides, the road only narrowed further. The bends were like fishhooks, and here and there were patches where the roadworks had not reached or where recent repairs had simply slid down the cliff. There were no barriers to protect motorists from the yawning 1,000-foot drops a matter of inches from the wheels. Superfluous roadsigns warned us to slow down and keep right. Erica didn’t need much encouragement. Everyone in the car seemed to become silent. I tried to look far ahead to see if anything was coming the other way. We could only imagine what it must be like for lorry and bus drivers.

I was beginning to enjoy myself.

In the clouds now. I like being in clouds, but it doesn’t help with the driving. Breaks in the mist revealed teasing glimpses of dark, sheer mountainsides. Here and there the sun poked through and a rainbow made a perfect technicolor arch over the road.

Then just as suddenly, out of the mist, full sunshine, the scenery changing from hairpin to hairpin. We were descending toward a lush shoulder of high land, an upper valley nestled in a crown of mountains far below, dotted with tiny farmhouses and quiltwork cornfields, into which the road descended in a series of insane switchbacks. It was a perfect lost valley; a prime spot for Eldorado.

I still have no idea how Sandy spots specimens from the car even at the modest speeds we were achieving. But at last Prof Knapp bade us stop for our first samples amid a gradually drier landscape.

The sun was melting the clouds away and the morning was mellowing nicely. Nearby, an allotment of sorts, a small bungalow and what I thought were petrol pumps. The immediate area was lush, catching runoff rainwater in a small series of irrigation ditches. Prime mozzie territory, I thought. Again, parts of the area had been cleared recently – the solanum species again proving keener than mustard to move in quick on new space.

My ridiculous sample notes about the sampling area – for ’twas my job – read: “A small irrigation ditch is nearby and a ‘petrol station’ nearby also.” I see now it was not a petrol station, but someone’s dwelling, but their toilets seemed public enough at the time.

Sandy and the Fly Girls exited, rummaged in the back for Sucky and Sweep, then set off into the undergrowth. Evelyn swished gamely. Erica bothered a bush. I made notes. Sandy snagged some excellent samples of solanum dilleni. I went to the toilet again.

On we went. As we sank riverwards, hopes rose in the back of the truck that the ever-more arid terrain may harbour the tomato relatives we had encountered in similar habitats earlier in the trip: habrochaites perhaps. It was getting drier and drier. I prefer the lush stuff up in the mountains.

We fairly freewheeled to the next stop a couple of miles hence, where a sharp bend in the road concealed a small clutch of solenum arcanum known from Sandy’s notes to be in this location many years previously. It was still there. All manner of insects waited to be sucked from the bushes, but nearby sat a sizeable troop of Homosapiens Peruensis, taking a break from mending the road. They were much animated by the sight of Erica’s immense suction apparatus. We had disturbed the species in its natural habitat, so had to bear with good grace the sniggering and what I imagined to be Spanish double entendres. The Challenges of Fieldwork.

My notes say we came away with some samples of “solanum simplefolium” but, according to Google, this doesn’t exist. That’s a shame – I liked that name. I can only imagine it was solanum sisymbriifolium. This sports little purple flowers and tiny tomatoes – tomatillos – which are edible. It’s a really close relative of our tomatoes. Indeed, it is sometimes called a wild tomato.

Further we sank toward the Marañon in our search for tomato and potato data, through spectacular peaks and pyramids of twisted volcanic rock where lava seams poked through like ribcages, past abandoned pasture and the occasional hungry-looking donkey picking through the brush.

At last we reached the valley floor, at the village of Chacanto in the district of Las Balsas – gateway to the Amazonas region. It was now all firmly semi-desert, reminiscent of parts of Nevada or Utah, catching the full ferocity of the sun. It felt like being stir-fried. The river looked inviting, but the Maranon slides through at a good clip here even in the dry season. It is a mere stream compared with what it would become downstream, but the bridge that spans it is a good 100m in length. We rolled over the bridge, stopped only a few minutes for a coffee in the sleepy village, and went on our way. We still had a long way to go…

Or read it here.

will the real tori jane please stand up