Not too many people go on holiday hoping for bad weather. Here I’m surrounded by them. We’re at yet another gas station, somewhere in southern Oklahoma. The sun is shining obstinately; it’s another beautiful day, apart from a distant, unremarkable line of cumulus congestus, the type you’d see on many a summer’s day in the UK. It was our second day stormchasing and I couldn’t fathom why Roger, our tour leader and a well known figure on the chase circuit, was so fired up by these innocuous-looking piles of fluff. I was soon to learn why. While we do see them in Blighty, here on the US Great Plains, a tower of cumulus can spawn a monster. And we were about to see its teeth close up.

In the stuffy old Reader’s Digest compendium my grandad gave to me, the most worn of the pages are the ones about the weather. In particular, one with a photo of the elephant’s trunk of a tornado snaking outlandishly across the Great Plains. From the first time I saw that old black-and-white photo I wanted to see a tornado.

And now I’m here in Oklahoma. The previous day I’d seen a handsome “supercell” thunderstorm spawn some huge hail, but no tornado – and my expectations were low. I knew enough about them to know they were rare. “If I see a tornado,” I said that day, “I’ll wear my underpants on my head.” So, we waited in the service station while the team – seasoned chasers Roger Hill, Mike Doyle, Bill Rhode, Ryan Shepherd and weather forecaster Justin Noonan from Brisbane, keenly studied the doppler radar models in the van. 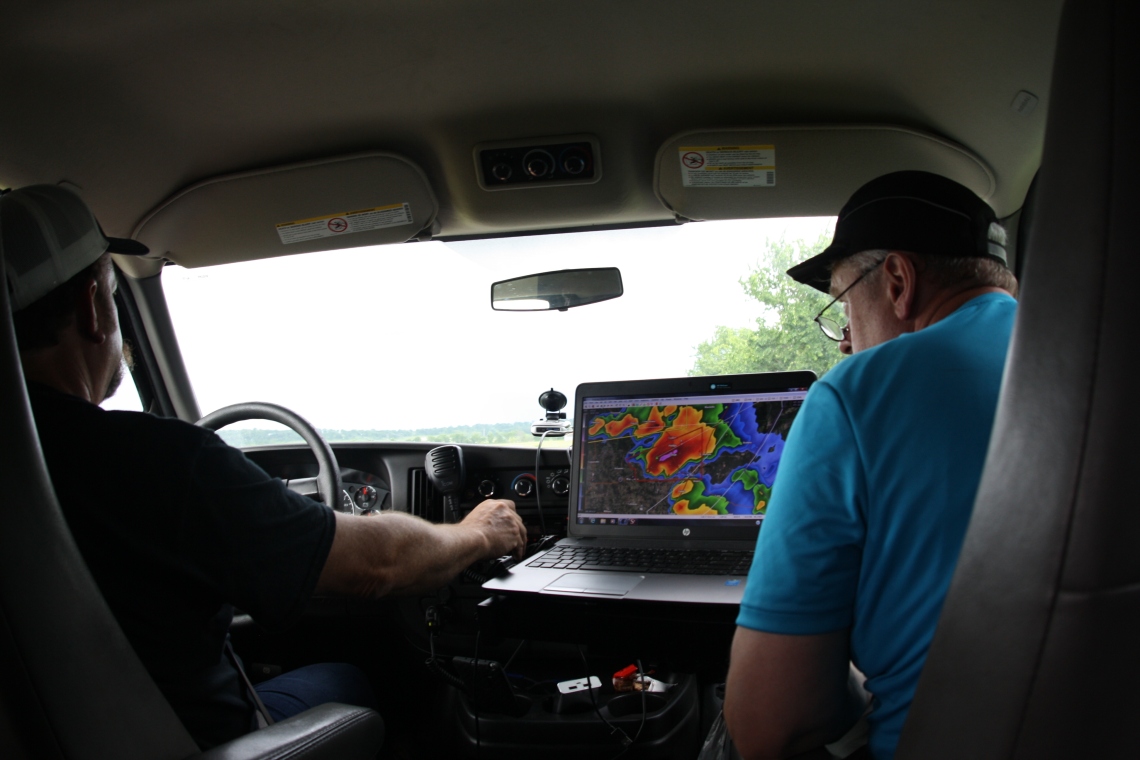 Of course, I was wrong about those clouds. To our west those harmless-looking ice-cream scoops had smashed into the stratosphere and spread into a gigantic anvil. And now it advanced in our direction like the gaping maw of a whale, blocking out the sun. The storm was brewing.

We head toward it. Roger gathers the troops and we all pile into the vans, heading west on Highway 29. Above us, a low, bullet-grey roof of cloud. In the distance, a distinct, localised lowering of the cloud base. Promising. Over the CB radio fitted to each van, Roger’s giving us updates on the growing chaos. “This storm’s developing a huge hook,” his models are telling him – as we can see from our own laptop in the front. “We’re gonna have a freakshow coming up here real soon,” says Roger.

We turn left on to a side road going south – perfect positioning to watch the storm pass us. That cloud is still lowering to the west – a classic wall cloud. We stalk further south, every eye searching west for gaps in the trees to the horizon. Nothing doing. A few of us take our eye off the ball, losing interest, fiddling with cameras. 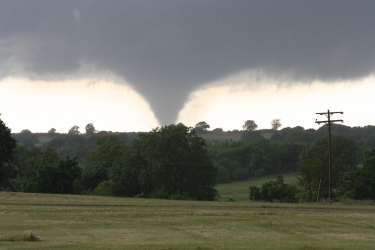 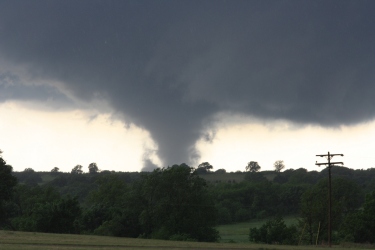 “Tornado at three o’clock!” I turn once more to the west and as a gap in the trees finally opens up, I can scarcely believe what I am seeing. Touchdown! The wall cloud has dropped a wide cone and there is debris being kicked up on the ground. At first it looks like an immense kettle has been left on as moisture and debris is siphoned into the thunderstorm above. I need to get out and see this urgently. We head up a long rise to gain a better view and as we crest the modest hill we leap from the vans to watch the boiling cone split into six vortices, all spinning round the central vortex like witches dancing round a cauldron. And it’s coming this way.

Roger’s giving us updates on the growing chaos. ‘We’re gonna have a freakshow coming up here real soon,’ he shouts
As it advances, the wall cloud around the snaking funnel develops into a rotating upturned crown of dirty cloud, a boiling mass that seems to have a life of its own. At first gunmetal grey with the sun behind it, the macabre maypole dance has now morphed into a wobbly funnel. Now it tightens into a pirouette – the classic elephant trunk, now light grey against the darkening plains. Less than a mile away now. Which way is this thing going? Roger decides it’s time to move. “Let’s go. We gotta get south of this thing.” But as we scramble the vans it becomes clear that we haven’t time. “We’ll never make it,” says Roger over the PA. “Turn the vans round so we’re ready to head north if this thing turns.”

We’re stuck in the van looking at this thing coming at us. It could be risky outside, but I can’t make do with witnessing something I’ve waited all my life to see through raindrops and safety glass. I slide open the door and watch over the roof of the van. It’s getting closer, but I’m too transfixed to move. Now Roger and the crew are out too; I take that as a sign of safety. It looks as though it will pass south of us. It’s been steadily moving east and looks like continuing that way. We watch in awe as the rotating wall cloud, now above us like a huge spaceship, sucks in air around us.

“Ow!” I hear someone say. Then a golfball lands on the grass in front of me. And another. Hail. Another hits the camera. Yet nobody takes cover, they are transfixed as the huge fat finger scores a line through crops and trees, now a beautiful solid funnel from ground to cloud … as it finally crosses the road perhaps a quarter of a mile away.

The noise it makes is strangely familiar, like a large waterfall. We step away from the power lines as the tornado sends great waves towards us, whipping the wires off their poles. Suddenly, the funnel seems blacker and grainier; something has been picked up. There’s a collective gasp as pieces of something wooden are whipped into the air. A roof comes off a barn seemingly at a safe distance from the funnel but it, too, is sucked into the cloud. Finally, it marches into the east, a beige grey trunk that begins to slim down into a long translucent tentacle. We clamber back in the vans, all of us dumbstruck. “I’ve seen over 700 tornadoes,” Roger says over the CB, “and on a scale of one to 10, that was about a 9.8.” 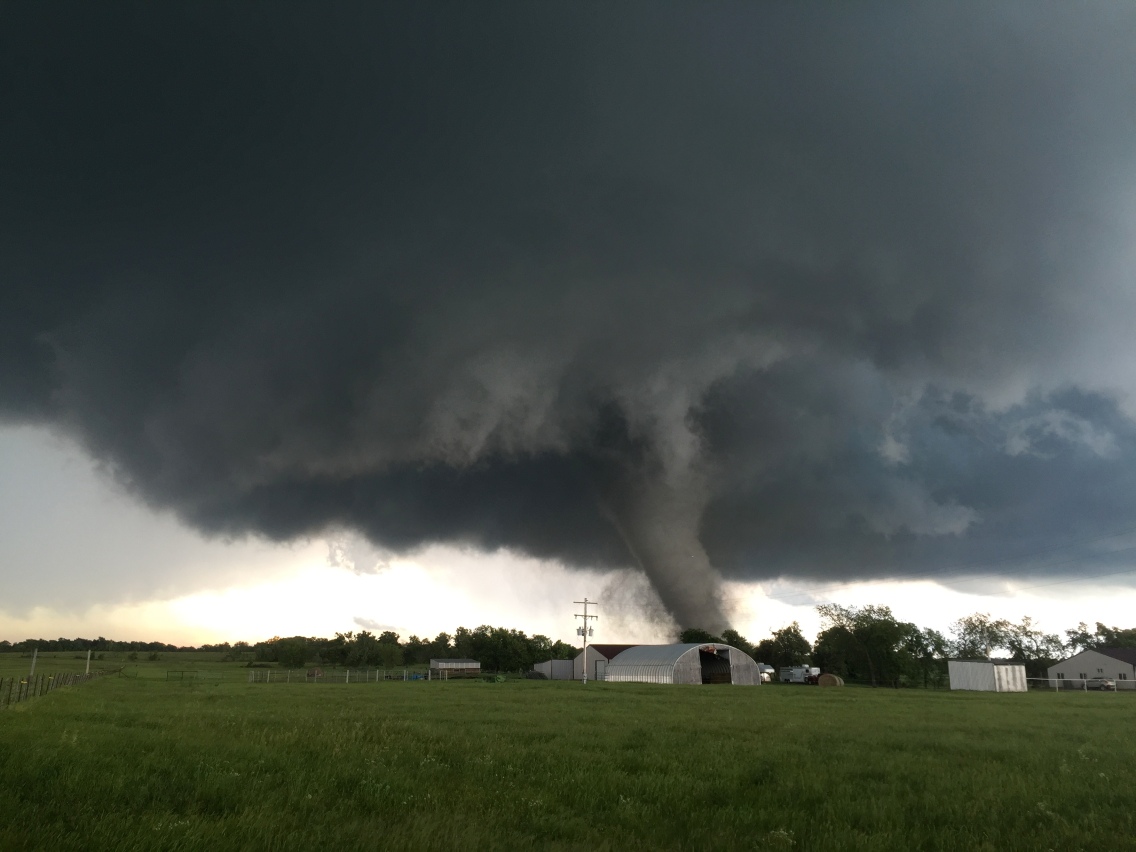 We head east following the storm’s progress on radar and radio. The local station is providing a running commentary. As we head toward the village of Sulphur, all hell breaks loose on the airwaves. Not another one? Half a dozen smartphones go off. There’s an emergency alert coming through: “There is a tornado warning in this area till 4.30pm CDT. Take shelter now.” The local radio has a crew on the ground. Suddenly they are saying there is an EF4, possibly an EF5 on the ground, moving east. It may go just north of Sulphur. “My God,” says Roger, “there it is. To the north, a massive wedge.” 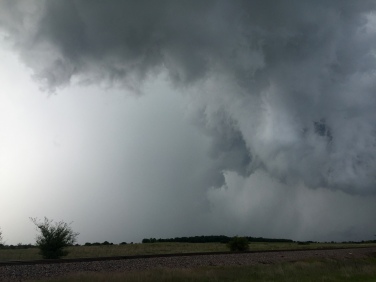 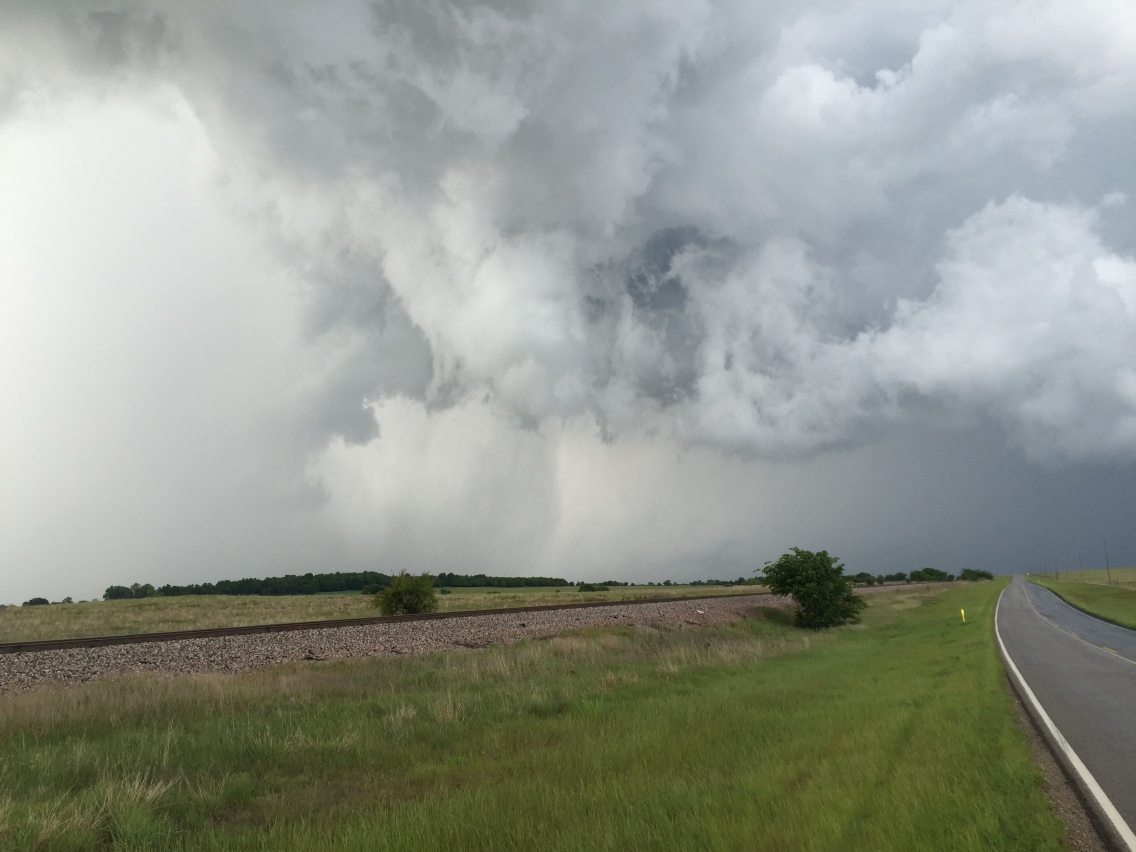 That day was a particularly eventful outbreak, spawning 23 tornadoes across the state. Not every day is like that. Overall, we did well to get four chase days out of eight, and only one of those produced tornadoes, but boy, was it worth it. The other three days produced wonderful electrical storms, glorious structure and, if you’ve never heard the sound of a billion pieces of softball-size hail being churned 30,000 feet above you, let me tell you it is weird. But unlike the movie Twister, not every day is Tornado Central. So it helps if you’re also interested in severe weather generally. A tornado is just the icing on the cake. “Storm chasing is, simply put, ‘mobile’ storm observing”, says Dan Robinson of Stormhighway. “It is a ‘weather safari’ with the intent to see and photograph natural phenomena.” May is the best month to go, but you can also encounter severe storms in April, June and autumn. 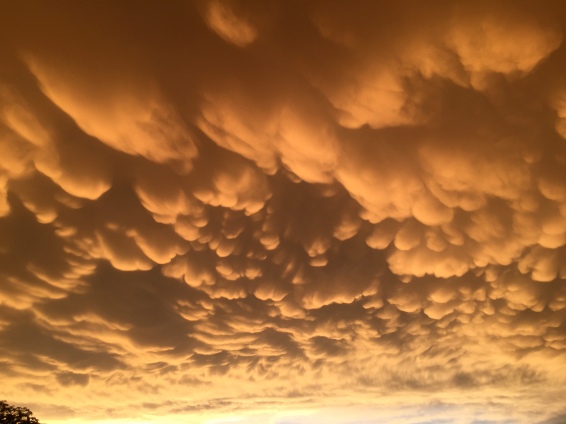 So who goes stormchasing? All sorts. Some people are weather experts and photographers – and they are essential as guides. Indeed, the more you know, the more you’ll get out of it. You’ll learn about the anatomy of a thunderstorm – about drylines, rear flank downdrafts and mesos. But you don’t have to be an expert, or some sort of extreme sports nut. On our tour there were a pair of retired Australian twins, a gap-year traveller, a photographer, a window cleaner and a pub landlord – and that was just in our van.
Prepare to spend much of your time in Tornado Alley (anywhere on the US Great Plains from south Texas up to Nebraska) driving – as much as 500 miles in a day – and waiting at gas stations. I loved all of this, though. You’ll make wonderful new friends. The food … well, the food is a bit meh. At any one time you may be 200 miles from a salad. But the accommodation was better than I expected. You’ll probably stay in decent two-star accommodation – perfectly comfortable with all mod cons, and it’s included in the price. Early in the season you might be based in Oklahoma City, later on in Denver, with impromptu stops in towns such as Abilene, Texas – wherever the wind blows you. 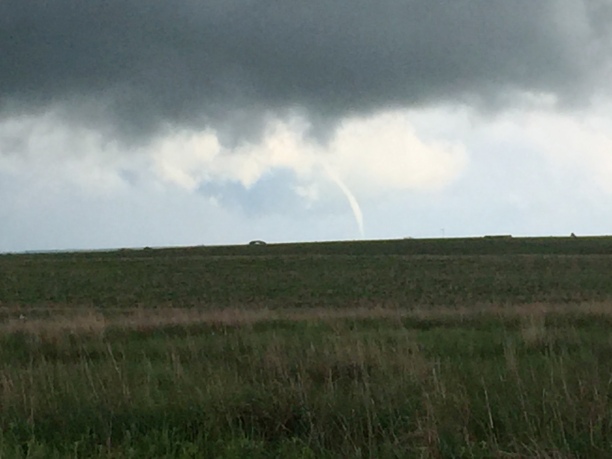 Is it safe? In short, yes. Safer than skydiving, whitewater rafting and climbing. As Dan Robinson says: “It’s about seeing the lions in their habitat, not getting into their dens.” And stormchasers respect that people do get hurt in these storms. But we are interested in the spectacle itself, which is ruined when there’s harm done.

As a hobby, it isn’t cheap – at least in Tornado Alley – mainly because of the amount of travelling you do. A week on the plains with accommodation and fuel might cost £1,000, and professional chase outfits such as the one we went with charge $2,000-$3,000 a trip. We paid our fees in instalments over a year. But I think it’s worth it. Nobody I spoke to on our tour, or the previous one, which was much less successful in terms of intercepts, regretted a moment. Fingers crossed for bad weather …

• The writer travelled on the T3: The Great Plains Cyclone Tour with Silver Lining Tours, which offers a range of multi-day tours, including accommodation, from $2,500.

The piece at the Guardian site.